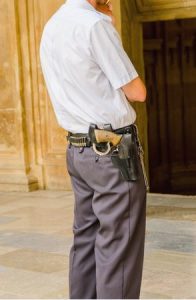 If and when you want to protect a place and/or the people at that place, do you need armed or unarmed security guards? It depends on the specific situation.

Unarmed guards work well for large events, apartment/office complexes, and plants/facilities where they’ll make workers, customers and visitors feel secure just by their presence. Unarmed guards are specifically trained to keep order. Furthermore, they’re a visible deterrent to those who might want to commit a crime, start trouble, or cause problems for others. Unarmed guards make sense working at entrances and checkpoints in order to maintain an organized, watched setting. Unarmed guards are regularly utilized at businesses and events.

Armed guards work well for “high-risk” locations where there’s lots of foot traffic and/or valuable assets involved. Banks are most likely to utilize armed guards, since huge sums of cash needs to be guarded against theft. Other places where armed guards make sense include schools, residential neighborhoods known for criminal activity, and warehouses with expensive inventory inside. In addition, armed guards are often used to transport public figures, such as well-known politicians. Why hire armed guards? They deter crime. People thinking of committing a crime will think twice when they see an armed guard on patrol.

C.O.P. Security provides unarmed or armed guards to many places in Western New York. Officers are reliable, highly-trained, and effective at their jobs. Indeed, many of C.O.P.’s armed guards come from a background of having used firearms in their previous jobs as police officers.

Whether they’re armed or unarmed, security guards provide peace-of-mind to people, helping make an area feel more calm as needed. In a world where violence and theft and trouble make the headlines, security guards are needed now more than ever to help put people at ease– especially in public settings.

Want to discuss your security needs? Call C.O.P. Security at 585-750-5608 or email rbarton@copsecuritycorp.com.