When you’re having an outdoor event you should hire a security guard or a security team, depending on the size of the event and number of attendees. The more people involved, the more security you’ll need. 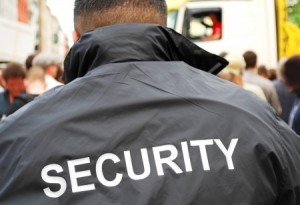 First and foremost, having security on the premises puts people at ease. It’s refreshing to know there’s someone there who is watching over the event and ready to step in, if necessary, to deal with any problem people or potentially violent behavior. Security guards, just by their presence, deter crime, too.

Next, security is able to check guests coming and going from an event, and, if needed, they can verify the people who are supposed to be there are “let in,” while keeping others, such as “party crashers,” out. In an era when people are scared that others might be carrying a knife or gun on them, even to an outdoor event, it never hurts to have security guards checking for such things.

Guests want to have a nice time; they don’t want to deal with a drunk or angry guest. That’s the security guard’s job! Furthermore, certain outdoor events attract protesters. Therefore, it’s important for event organizers to plan ahead, and have security guards stationed in key places to deal with any situations that get out of hand. If and when there’s a serious problem, security guards can call police for back-up.

Outdoor events are held in several places, like amphitheaters, stadiums, festival grounds, theme parks, municipal parks, and fairgrounds. They go on rain or shine. Attendees can be in good or bad moods. Security guards can be at outdoor events not only watching over the crowd to keep the peace, but also to serve in certain roles such as ticket takers or parking lot attendants. Guards are often called upon to handle line control as well as be the person guests ask questions of, like, “Where’s the bathroom?” or “Which way to the party?”