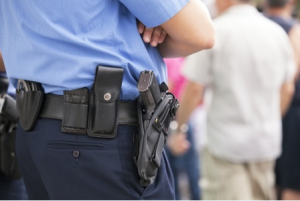 Paul Blart: Mall Cop was a funny movie about a mall security guard. In the movie, actor Kevin James played Paul Blart as a chubby, bumbling wannabe cop. Indeed, movies and TV shows for years have shown security guards as the butt of jokes– too busy sleeping, watching TV or eating fast food to actually be doing their job well… and/or acting as if they’re true police officers when they’re not. In real life, the majority of security guards are not like Paul Blart and other fictional characters. If you were to become a security guard having never done so before, you’d find it to be the kind of job that is hard work, requiring both mental and physical stamina.

Security guards do a dangerous job. There’s always the chance of being assaulted, injured, or shot. Like police officers, they have to deal with all sorts of people, including troublemakers who are up to no good.

What can security guards do to help police officers? For starters, there should be mutual respect between them since they’re both trying to do their jobs to the best of their abilities. A “we’re all in this together” attitude is much better than an “us-versus-them” approach.

Next, security guards are smart to emulate police officers in the way they dress. Nothing commands attention like a well-dressed, neat professional. Little things like tucking in shirts, wearing belts, and not having stains on one’s shirts goes a long way in showing that you take your job seriously and that you should be taken seriously.

Finally, a security guard’s job comes down to two things: observing and reporting. By keeping an eye on what’s happening and then accurately reporting events and situations to police officers, a security guard is fulfilling his or her role the right way.