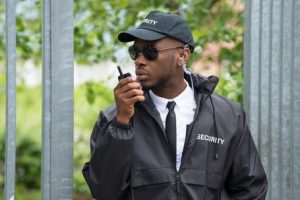 Security guards use a variety of tools to get their job done. If you were thinking of becoming a security guard, you probably wondered, at some point, what kind of tools you would use. Whether you’re controlling access to certain areas, protecting people and/or property, or you’re on the lookout for any suspicious or potentially illegal activities, you need certain tools to accomplish the task(s) at hand.

As for the basics, most security guards end up carrying a flashlight with them. This not only comes in handy at night, when it’s dark outside, but also during times when the power goes out. Also, if it’s a large event or facility, security guards tend to use two-way walkie-talkies and/or mobile phones to be in contact with fellow guards and/or supervisors. Depending on the nature of the job, security guards may or may not carry handcuffs with them, which can be used to subdue and/or detain others if needed. Other security guard basic tools can include a first aid kit, fire extinguisher, and alarm/whistle for use during emergencies.

Though you may not think of clothing as part of “tools of the trade,” a security guard’s clothing plays a significant role in his or her job, typically holding and/or concealing tools, which can include masks, gloves, pepper spray, guns, etc. Typical security guards’ clothing includes a uniform with the label “Security” on it, complete with a hat, jacket and badge.

For surveillance, some tools a security guard might use include binoculars, listening devices, and some sort of vehicle. Guards have been known to do their jobs via car, van, bike, scooter and, yes, even golf carts. Guards also typically work with closed-circuit TV systems, looking at monitor screens to cover many areas at one time. For those who deal with crowds coming into venues, X-ray equipment, metal detectors, “wands,” and scanning devices are some of the tools employed.

Should a guard need self-defense, their weapons may include pepper spray, batons, tear gas, gas masks, and, of course, specially trained security guards may have guns. In many cases, security guards wear bulletproof vests.

When involved in administrative tasks, such as filling out reports, security guards deal with computers, word processing software, printers, and copiers. Meanwhile, keys and/or passcodes are used all the time.

These are just some of the tools security guards may use on the job. If you’d like more information about the tools COP Security uses to get the job done, call 585-750-5608.